The guitar god which every music fan marvels at is none other than Joe Bonamassa. A sensational blues-rock master, and hailed as one of the world’s greatest guitar players, Bonamassa is a bona fide crowd drawer, one of the best live acts, certified a 'must-see' concert artist, bar none. Catch him as he slides over to the NYCB Theatre at Westbury on Friday 18th March 2022. Get your tickets now! 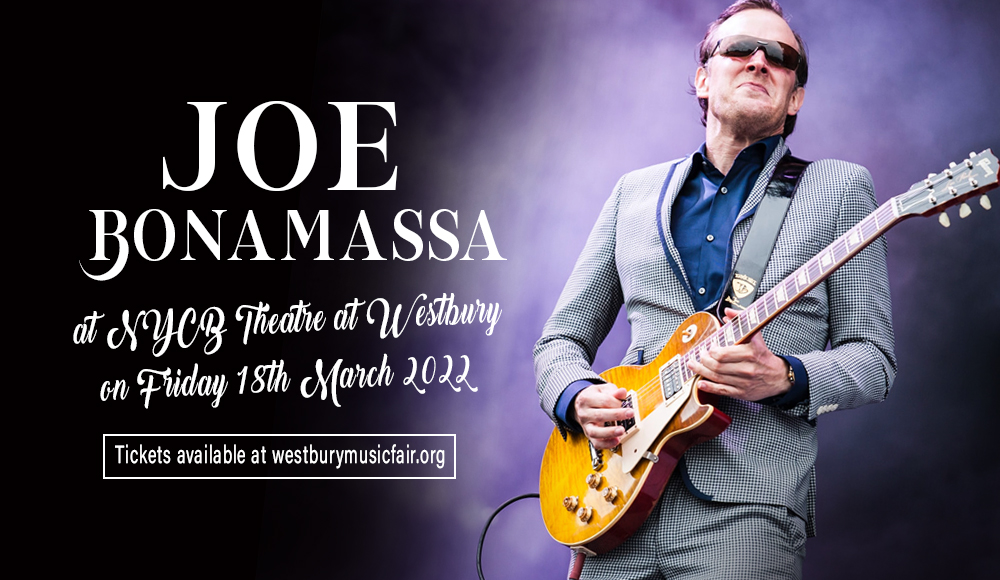 There are a lot of great guitar players out there but only a chosen few are elevated into the realms of guitar gods. Blues-rock guitarist, singer and songwriter Joe Bonamassa is one. His prodigious talent started at the tender age of four; and by the age of 12, he founded and fronted his own band called Smokin' Joe Bonamassa, which gigged around western New York and Pennsylvania. Now, who could spot a guitar whiz but another guitar god himself? The young Bonamassa became the opening act of B.B. King himself at approximately 20 shows. In 1991, Disney's prestigious talent camp honored his masterful skills as he performed on The Mickey Mouse Club where he was inducted into the Hall of Fame.

Since then, Joe Bonamassa has been reaping accolades from his peers and recognitions which include two Grammy Awards, Guitar International’s 2011 “Guitarist of the Year,” “Breakthrough Artist of the Year” at the 2009 Classic Rock Roll of Honour Awards in England, No. 48 in Guitar World’s 100 Greatest Guitarists of All Time, and Billboard’s No. 1 Blues Artist of 2010.

Music critics and the press lauded his work, calling him…

Under his independent record label J&R Adventures, Bonamassa has released 15 solo albums, with a career total of 24 albums hitting number 1 on the Billboard Blues charts. This year, Bonamassa is back on the road to delight his massive followers with his brand new album "Time Clocks".

The clock is ticking…every minute counts when fans are locking in their tickets non-stop. Click that "Get Tickets" sign on this to book your tickets right here, right now!