Having spent much of 2017 on the road with Canadian rockers Nickelback, Daughtry are hitting the touring trail once again to promote their eagerly anticipated fifth album! The band will be coming to NYCB Theatre at Westbury on Saturday 24th March, 2018 to rock your worlds! American Idol finalist and frontman Chris Daughtry had this to say:

“We are very much looking forward to hitting the road again and reconnecting with our fans! We’ve been grinding away in the studio working diligently on our 5th album and cannot wait to share the new material in 2018! Our fans have waited long enough.” 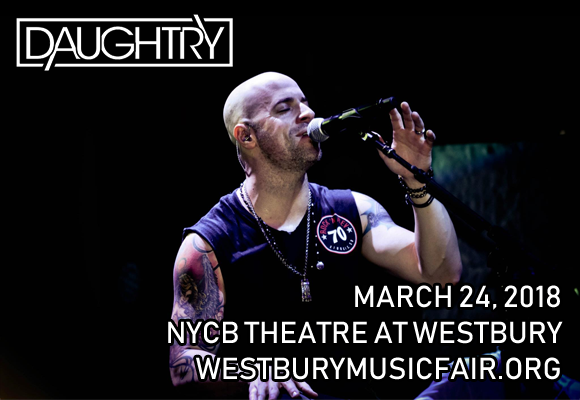 Formed and fronted by namesake and 5th season American Idol finalist Chris Daughtry, Daughtry are an American rock band. The band’s quadruple-platinum-selling self-titled debut album went straight to number one on the Billboard 100 upon its release in November 2006. The fastest-selling debut rock album in Soundscan history, the album was also the best-selling album of 2007, selling more than four million copies in the United States. Their 2009 follow-up, Leave This Town, launched at number one, and the band’s following two albums both charted in the top ten. Daughtry’s fifth studio album is soon to be released.