Coming to NYCB Theatre at Westbury on Wednesday 20th June 2018, country singer Trace Adkins is hitting the road this summer on his How Did We Get Here Tour! This will be the second time the esteemed performer has visited the theatre this year, having performed a lively, yet intimate show back in June. Join Trace once again as he captivates fans with his chart-topping hits! 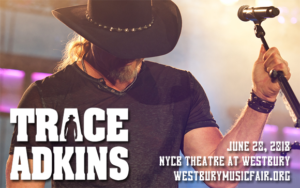 Rising to prominence in 1998 on the PBS music program Austin City Limits, American singer, songwriter and actor Trace Adkins made his debut two years prior with the release of his first studio album, Dreamin’ Out Loud. Adkins has released eleven studio albums and two Greatest Hits compilations to date, and has charted more than twenty singles on Billboard’s country music charts, including number one singles “(This Ain’t) No Thinkin’ Thing”, “Ladies Love Country Boys”, and “You’re Gonna Miss This”. With the exception of one, Adkin’s studio albums have all been certified either gold or platinum in the US, including his 2005 album, Songs About Me, which received double-platinum certification for shipping two million copies; his highest-selling album to date.