Bona fide funnyman Tom Segura comes to NYCB Theatre at Westbury on Friday 29th March 2019 on his Take It Down Tour! Segura, who recently returned to Netflix for the third time with "Disgraceful", his newest special, is known for his straight down the line observational comedy and unabashed hilarity:

“I like joking about inappropriate behavior,” Segura admitted in an interview with AXS earlier this year. “As soon as I see something that’s an unconventional, unorthodox way to react or behave, it’s always going to be somewhere in my act.” 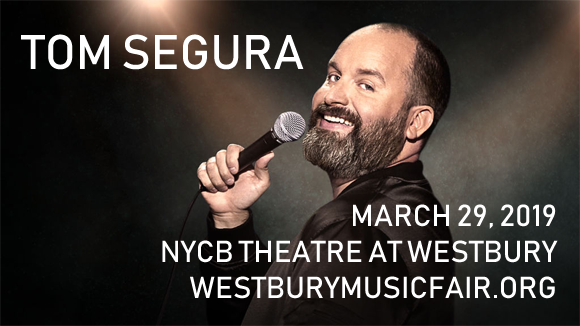 American stand-up comedian, actor and podcast host Tom Segura is best known for his Netflix specials Completely Normal and Mostly Stories, as well as his stand-up appearances on Comedy Central. Segura began his career in stand-up upon leaving university, and over the years has made the transition into acting, appearing in television programs such as Conan, Workaholics, Happy Endings, The Late Late Show and How To Be A Grown Up. He has appeared internationally at a range of prestigious comedy festivals including Montreal’s Just For Laughs Comedy Festival, The Melbourne International Comedy Festival, The Comedy Festival – Las Vegas, The South Beach Comedy Festival, and The Hong Kong Comedy Festival. All three of his comedy albums, Thrilled (2010), White Girls with Cornrows (2012) and Completely Normal (2014), reached the top of the iTunes comedy chart. He also co-hosts the podcast Your Mom’s House with his wife, comedian Christina Pazsitzky.