Skip back, Jack, to the Swinging Sixties as the Yardbirds bring their groundbreaking psychedelic blues-rock to NYCB Theatre at Westbury on Sunday 6th May, 2018! These veteran performers will be performing the hits and fan favorites that made the one of the biggest guitar bands of all time, so come and get your groove on! Tickets available now! 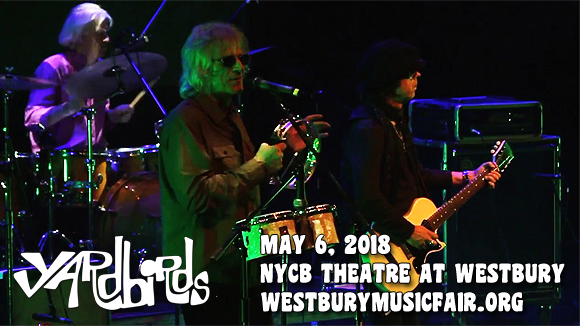 Formed in London in 1963, The Yardbirds are an English psychedelic blues-rock band. The band’s original core line-up consisted of vocalist and harmonica player Keith Relf, drummer Jim McCarty, rhythm guitarist/bassist Chris Dreja and bassist/producer Paul Samwell-Smith. The band have performed with several lead guitarists over the years, launching the careers of Eric Clapton, Jimmy Page and Jeff Beck, who have all been ranked in the top five of Rolling Stone magazine’s list of 100 greatest guitarists. Innovative and avant garde, the band were pioneers of the psychedelic rock movement of the Sixties, and were inducted into the Rock and Roll Hall of Fame in 1992. Drummer Jim McCarty is the sole original member of the current band lineup.