An Australian institution and one of the world’s most popular children’s entertainment groups, The Wiggles, are headed to NYCB Theatre at Westbury on Sunday 17th June, 2018! Joined by Dorothy the Dinosaur, Captain Feathersword, Wags the Dog and Henry the Octopus, Emma, Simon, Lachlan and Anthony will be having fun, fun, fun on the Wiggle Wiggle Wiggle Tour, performing all your children’s favorite Wiggles’ songs live! Perfect for your pre-schooler’s first concert! 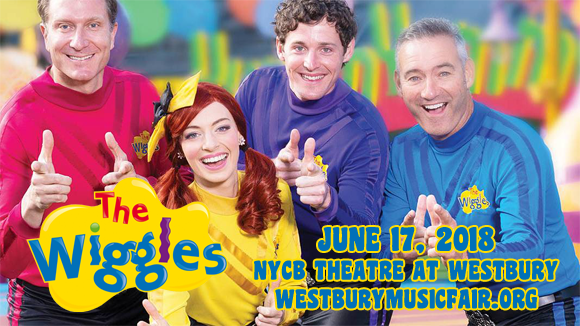 Winners of multiple Australasian Performing Rights Association (APRA) and Australian Recording Industry Association (ARIA) Music Awards, The Wiggles are an Australian children’s music group formed in Sydney, New South Wales, in 1991, currently comprised of Anthony Field, Lachlan Gillespie, Simon Pryce, and Emma Watkins. When Field was training to be a pre-school teacher, he enlisted Murray Cook, Greg Page, and Jeff Fatt (friends and original Wiggles members) to help him record an album of children’s songs based around pre-school learning concepts. When the group went on tour to promote the album, they were met with such success that they were able to leave their teaching jobs to become full-time performers. Over the years, The Wiggles have earned several Platinum, Double Platinum and Multi-Platinum records, and have sold 23 million DVDs and 7 million CDs worldwide. They perform to roughly one million people per year and were listed as Business Review Weekly’s top-earning Australian entertainers four years in a row.