Seamlessly bridging the gap between classical and pop, The Tenors return to NYCB Theatre at Westbury on Tuesday 16th October 2018! The trio will be performing as part of their Fan Favorites Tour, which features all the best-known and best-loved songs from their extensive repertoire! These multi-platinum-selling singers are nothing short of spellbinding, so if you're a fan of soaring vocals and captivating arrangements this is the show for you! 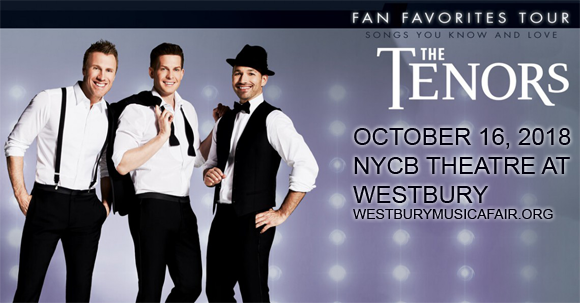 Originally known as The Canadian Tenors, The Tenors are an operatic pop vocal group hailing from Victoria, British Columbia, Canada. The group formed in 2004 and originally consisted of singers Philip Grant, Paul Ouellette,and Ken Lavigne, who released their platinum-selling self-titled debut The Canadian Tenors (Warner) in 2005. Today the group consists of Victor Micallef, Fraser Walters and Clifton Murray. Over the years, the group has become a household name and they have performed on over 60 television shows to date, including the Oprah Winfrey Show, the 63rd Primetime Emmy Awards, at the opening ceremonies of 2010 Winter Olympics in Vancouver and on ITV (TV network) Diamond Jubilee Show at Windsor Castle for HM Queen Elizabeth II. The group's third studio album, 2012's Lead With Your Heart, went triple-platinum in Canada, and won the 2013 JUNO Award for Adult Contemporary Album of the Year. Their most recent album, Christmas Together, was released in October 2017.