The Jacksons’ are bringing their Unity Tour to New York! On Friday the 26th of July 2013, the NYCB Theatre at Westbury will be host to Jermaine, Jackie, Marlon and Tito! The show starts at 8:00pm… This is one you cannot miss! 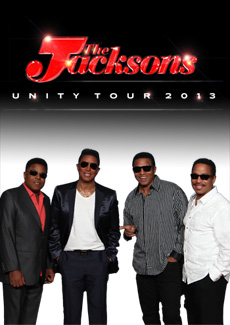 For the first time since Michael Jackson’s passing in 2009, the brothers are touring as the Jacksons in their Unity Tour. It is their first concert tour in almost three decades and is nearly at an end! They will be keeping the family’s legacy very much alive with some of their biggest hits including ‘Blame it on the Boogie’, ‘Rock With You’, ‘Don’t Stop ‘Til You Get Enough’, ‘Let’s Get Serious’ and the classic ‘ABC’. The studio recording of ‘ABC’ being among the ‘500 songs that shaped rock and roll’ in The Rock and Roll Hall of Fame whilst the group spanned over four decades initially. Jackie, speaking of the tour, said ”I know at each concert, MJ’s spirit will be in the house with us”. The brothers are set to perform with a flare of creativity and passion and, since no further tours have been announced, this could be the last chance you’ll get to see them!

The Unity Tour is coming… Are you ready?