It's time for a trip down memory lane as The Golden Boys: Frankie Avalon, Fabian & Bobby Rydell come to NYCB Theatre at Westbury on Saturday 27th June 2020! Three of the biggest teen idols of the 1950s and '60s, these seasoned crooners have spent their lives entertaining crowds, and nobosy does it better! Expect an array of hits from these legendary stars, including: "Turn Me Loose", "Tiger", "I'm A Man" (Fabian); "Venus", "De De Dinah", "Bobby Sox to Stockings" (Avalon); "Volare", "Wild One", "Kissin' Time" (Rydell)! A dreamy concert that will transport you back to those halcyon days, enjoy a very special evening with The Golden Boys! 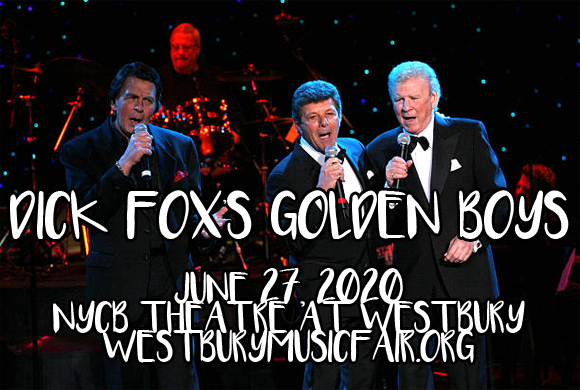 Frankie Avalon is best known for his 1959 number one hits "Venus" and "Why," and he charted a whopping 31 U.S. Billboard singles from 1958 to late 1962 . He went on to have a booming career as an actor in a series of "beach party" films for American International Pictures, and in later life was cast in the memorable role of Teen Angel in the 1978 hit music film Grease, where he performed the song "Beauty School Dropout."

Rock and roll singer Bobby Rydell charted him 34 top 100 hits throughout the late-1950s and early '60s, placing him in the top five artists of his era, according to Billboard. His biggest hits were the number two single "Wild One" and his cover of Domenico Modugno's "Volare."

Shooting to fame after a number of appearances on American Bandstand, Fabian had 11 Billboard Hot 100 hits and was a bona fide heartthrob, finding whirlwind success as a singer, before striking up an acting career with 20th Century Fox. He later also signed with American International Pictures, and in the 1970s, he made a return to music.