Legendary 60's group – The Beach Boys are returning to the NYCB Theatre Westbury stage on Friday 12th February 2016! It's great news for Beach Boys fans as they hit the road once again to showcase their best known hit songs LIVE in concert! Catch your favorites such as "Good Vibrations", "God Only Knows", "Wouldn't It Be Nice" and "I Get Around." The band’s tour features shows all around the U.S. to give fans the opportunity of a life-time. Tickets are guaranteed to sell fast – so book yours today! 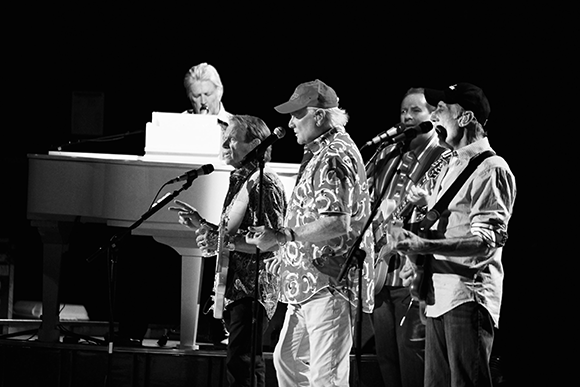 The Beach Boys need no introduction with a legendary career that has them titled as the most iconic and one of the most critically acclaimed, commercially successful, and widely influential bands of all time!

Influenced by the jazz-based vocal group era, 1950s rock and roll, and doo-wop, lead vocalist Brian Wilson encouraged The Beach Boys to experiment with a different way to music production and arranging, by incorporating genres that had never been associated with the mainstream pop ballads, from psychedelic to baroque. Their effortlessly blended vocal harmonies crafted them their unique selling point and a sound that would endure the whole of the rock n roll era. The Californian quintet give groundbreaking performances time and time again, encouraging the long lasting dedicated fans to attend, as well as appealing to the new.

"When The Beach Boys made their debut 50 years ago, the group and their distinct vocal harmonies revolutionized the music industry with a fresh new ‘California Sound’ that resonates with audiences of all ages to this day."