A treat for all rock and roll fans, guitarist of legendary band The Doors, Robby Krieger, comes to NYCB Theatre at Westbury on Friday 1st May 2020! Krieger, whose most recent album was 2010's Singularity, will be performing with estblished blues rocker special guest act the Edgar Winters Band, and will be joined in support by Mountain founder and fellow rock guitarist Leslie West! This show is an absolute must for those with an appreciation for true rock music! 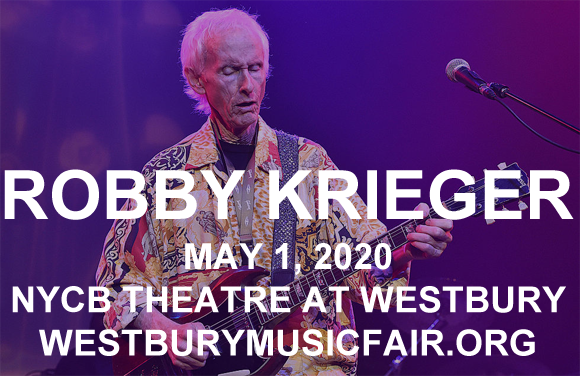 Best known as the guitarist from iconic psychedelic rock band The Doors, Robby Krieger is a Rock and Roll Hall of Fame inductee and has been listed by Rolling Stone as one of the 100 greatest guitarists of all time. The co-writer of many of The Doors' hits, including "Light My Fire", "Love Me Two Times", "Touch Me", and "Love Her Madly". The Doors are one of the best-selling bands of all time and were the first American band to accumulate eight consecutive gold LPs. Krieger has also enjoyed decades of success as a solo artist, as well as performing with other bands, including Butts Band.