Michael McDonald and Toto are teaming up for the event of the year! They will be kicking off a live performance at the NYCB Theatre at Westbury from 8:00pm on Sunday the 17th of August! Can you imagine missing out on this?… Surely not! 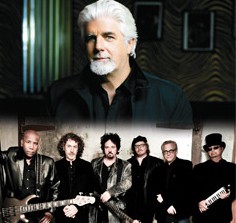 Five time Grammy award winning Michael McDonald began his career as a backup vocalist for the band Steely Dan in three albums through 1975 to 1978. He also joined The Doobie Brothers in 1975 as lead singer releasing some of his best known songs including ‘Minute By Minute’ and’What a Fool Believes’. In 1982, Michael McDonald brought out his debut album ‘If That’s What It Takes’. Since then, the star has had several reunions with The Doobie Brothers and released tracks upo tracks of great music! Supporting Michael McDonald will be Toto! Toto have seventeen albums and in excess of thirty five million records sold. They were inducted into the Mucisians Hall of Fame and Museum in 2009 along with winning several Grammy Awards. This year, Toto are celebrating their 35th anniversary, this will be on major event where they are involved!

Tickets are on sale now… get yours fast to save disappointment!