Spend a wonderful evening sitting back and unwinding to music that would take you on an aural journey across country, folk, alternative, and acoustic rock music. “An Evening with Mary Chapin Carpenter, Marc Cohn and Shawn Colvin: Together in Concert” is a triple treat of not one, not two, but three Grammy Award-winning artists gracing the stage of the NYCB Theatre at Westbury on Tuesday 5th October 2021. Each artist comes with a stellar track record of best-selling and critically acclaimed treasure trove of songs. Mary Chapin Carpenter, Marc Cohn & Shawn Colvin are reuniting again on the live concert stage not only to entertain but also to bring stories, emotions, and inspiration to their legions of followers. This show is definitely a bang for your buck. Tickets are available here, by clicking on the 'Get Tickets' link on this site. Don't miss it, book your tickets now! 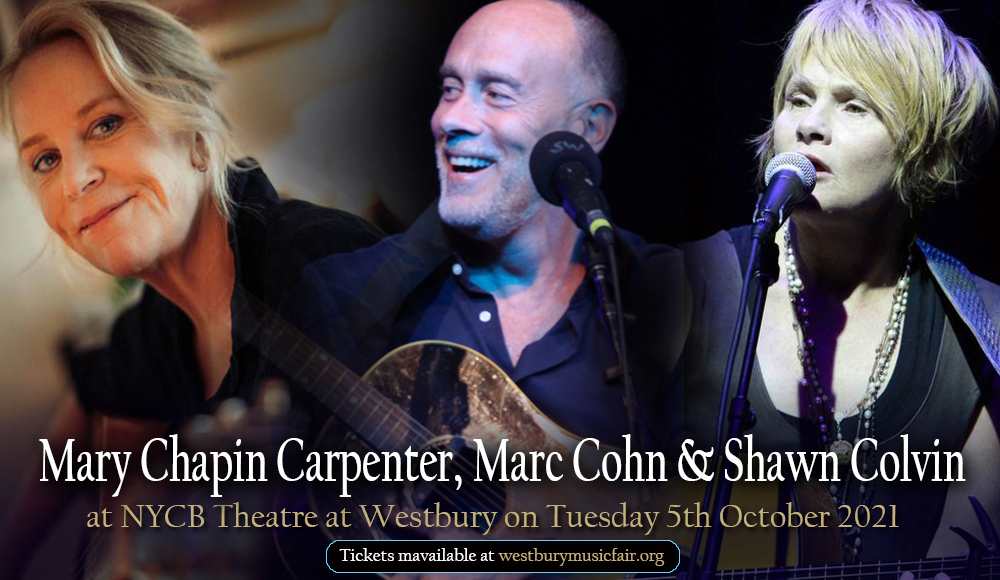 Marc Cohn is that captivating voice behind the enormous 1991 hit "Walking On Memphis," from his eponymous debut album. Since then, Marc Cohn has delivered an endless string of remarkable songs. His brilliance shines through as a songsmith who can weave soulful emotions, vivid stories into the most beautiful melodies. Time magazine called him "one of the honest, emotional voices we need in this decade" and Bonnie Raitt declared, "Marc is one of the most soulful, talented artists I know. I love his songs, he's an incredible singer, and I marvel at his ability to mesmerize every audience he plays for." “Walking In Memphis” propelled his self-titled debut album to Gold status within a year of its release and he took home a Grammy for Best New Artist award.

Mary Chapin Carpenter is one of the most recognizable names in country music. She started releasing albums in 1987 but struck a big gold, rather platinum mine as her 1992 album "Come On Come On" yielded seven charting country singles and was certified quadruple platinum in the US for sales exceeding four million copies. Mary Chapin Carpenter holds the record as the only artist to have won four consecutive Grammy Awards for Best Female Country Vocal Performance, which she received from 1992 to 1995. She has sold over 12 million records worldwide. On October 7, 2012, Carpenter was inducted into the Nashville Songwriters Hall of Fame.

Shawn Colvin is a singer-songwriter, best known for taking home the 1998 Grammy Awards for both Song and Record of the Year for "Sunny Came Home". As Shawn was recently recognized for her career accomplishments to receive the 2016 Lifetime Achievement Trailblazer Award by the Americana Music Association, presenter Bonnie Raitt introduced her saying: “She’s simply one of the best singers I’ve ever heard—and a truly gifted and deep songwriter and guitarist… She was groundbreaking when she emerged and continues to inspire me and the legions of fans and other singer/songwriters coming up in her wake.”

“An Evening with Mary Chapin Carpenter, Marc Cohn and Shawn Colvin: Together in Concert” will truly be an evening well spent. Best enjoyed with friends and loved ones in tow. Book your tickets now!