Join gravel-voiced, Grammy Award-winning “Walking In Memphis” singer Marc Cohn for an intimate evening of gospel-tinged folk! Coming to NYCB Theatre at Westbury on Sunday 18th March 2018, Cohn will be performing songs from his three-decade career and will be joined by five-time Grammy Award-winning gospel group the Blind Boys of Alabama for a very special event! 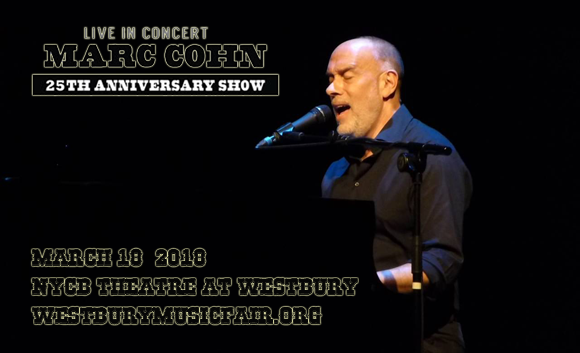 Grammy Award-winning American folk rock singer-songwriter and musician Marc Cohn’s career in the music industry began in the 1990s when he was signed to Atlantic Records after working as a backing pianist on Tracey Chapman’s second album. Cohn’s hugely successful eponymous debut album was released in 1991, launching the single “Walking In Memphis”, which was nominated for Song of the Year and Best Pop Vocal at the 34th Annual Grammy Awards. The album was certified Platinum in 1996, and led to Cohn winning a Grammy Award for Best Newcomer in 1992. To date, Cohn has released four studio albums, two compilation albums and a live album.