If you've been looking for a time machine that would take you back to the days of fast cars driven by two rough and rugged cousin hillbilly hunks that go by the moniker 'Dukes of Hazzard', then you've come to right place, but not quite…

John Schneider & Tom Wopat were once dukes on prime time TV, but now they're sharing a concert stage and a microphone for their one-night-only show at the NYCB Theatre at Westbury on Saturday 11th April 2015. You've got to hear 'em and be blown away by their singing voices. Now get into the action of buying you and the whole gang a bunch of tickets. Don't miss this! 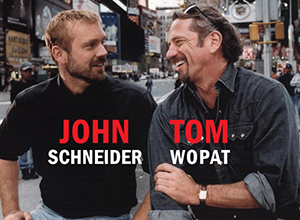 Before the term 'bromance' was ever coined, John Schneider and Tom Wopat were not only brothers on prime time TV. They also shared a common talent for singing and performing. Before even finding a home on the set of Dukes of Hazzard, Wopat's address was on Broadway. He landed a lead role in the musical I Love My Wife, and stayed on until 1979. Then he made a grand Broadway comeback in the 90s, and even bagged for himself a Tony nomination for his work in the revival of "Annie Get Your Gun". Meanwhile his TV partner John Schneider scored four chart-topping country hits as soon as he went solo, fresh from final season of Dukes of Hazzard.

And yes, their lives crossed again, this time with microphone in tow, which resulted in the release of a Christmas Holiday album titled "Home For Christmas" in 2014. "We've always sung together and it's always been a great deal of fun," Wopat says. "We've gone our separate ways a little bit, but we've remained best of friends. I think that really comes through on the record." The album was well-received, so now they're taking the music on the road where fans of all generations could celebrate with these guys over 30 years of 'bromance' / friendship / partnership, and of course, music.