Consummate showman and comedian Jackie Mason brings his satirical, observational wit to NYCB Theatre at Westbury on Saturday 2nd December 2017 for a night of utter hilarity! The beloved borscht-belt comic may be octogenarian, but his humor is as side-splitting and relevant as ever – don’t miss your chance to see this legend performing live! 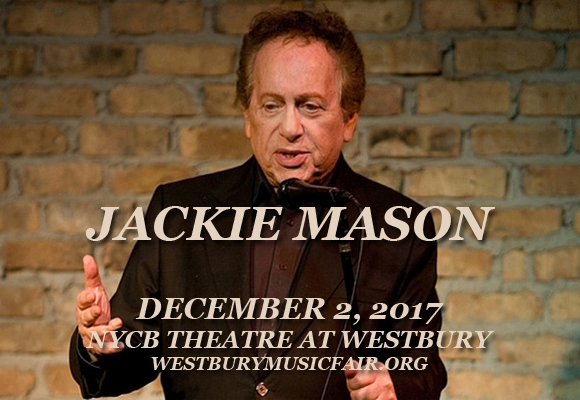 One of the world’s best-loved comics, American stand-up comedian and film and television actor Jackie Mason is ranked #63 on Comedy Central’s 100 greatest stand-up comedians of all-time. Mason began performing stand-up comedy in the mid-1950s and was considered ahead of his time. Thorughout the 1960s, Mason made several appearances on nation televison, on shows including The Steve Allen Show, the Tonight Show with Steve Allen,The Perry Como Show, The Dean Martin Show, and The Gary Moore Show. Mason had a resurgence of popularity in the 1980s due to his 1986 one-man show The World According to Me, which won a Special Tony Award, an Outer Critics Circle Award, an Ace Award, an Emmy Award, and a Grammy nomination. He has three Emmy Awards to date, and has written and performed in six one-man shows on Broadway.