It was on the 'White Album' where The Beatles sang 'Why Don't We Do it On The Road?'. That was fifty years ago… But today, a troop of all-star artists has teamed up to bring this rock classic and all the other songs from the immortal White Album on the road and on the live stage. It Was Fifty Years Ago Today – A Tribute To The Beatles White Album features Micky Dolenz, Christopher Cross, and Todd Rundgren, teaming up with former Chicago singer Jason Scheff and Badfinger guitarist Joey Molland. They're taking this tribute show on the road, making the NYCB Theatre at Westbury, as one of its stops, on Saturday 12th October 2019. This is truly one of the most unique Beatle-tribute shows ever assembled. A treat for Beatle music fans of all generations. Get your tickets now! 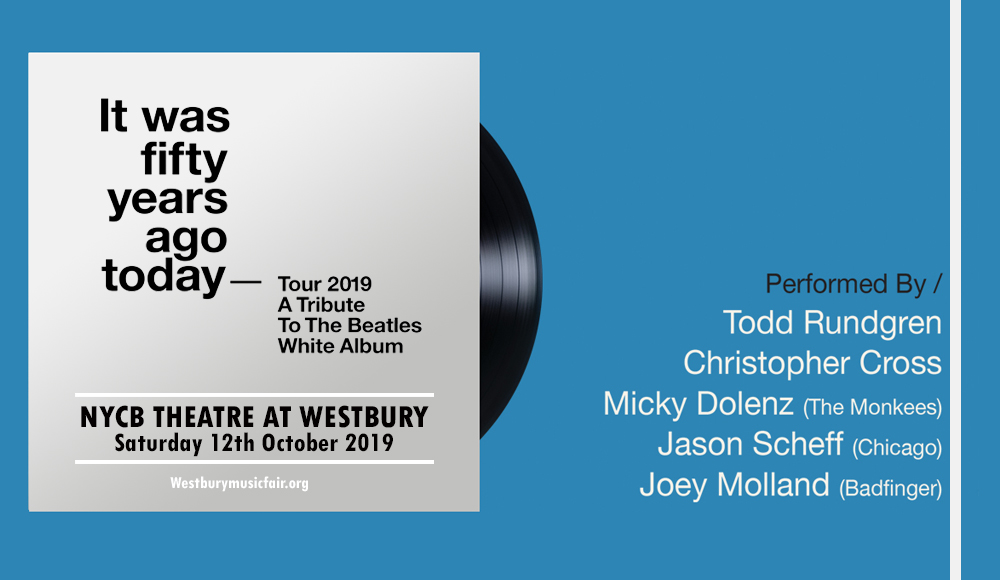 The Beatles' White Album came out in the 60s with mixed reviews, but with an ammunition of hits nonetheless. "Back in The USSR". "Blackbird", "Obladi-Oblada", "Helter Skelter", "Why My Guitar Gently Weeps"….the list of the classic and the obscure hits can all be found on this album. Fifty years has passed since its release, people are still singing, talking, playing, and now streaming and downloading this album. There have been numerous Beatle-tributes but no one actually focused on the White Album up until now…

It Was Fifty Years Ago Today – A Tribute To The Beatles White Album will be brought to life on the live stage by an all-star line-up of music artists — Micky Dolenz, Christopher Cross, and Todd Rundgren, teaming up with former Chicago singer Jason Scheff and Badfinger guitarist Joey Molland. They are stars in their own right and have some loose connections with The Beatles as well. Rolling Stone magazine found traces on how they are tied up with the fab four. "Molland was the guitarist for Badfinger, the first band signed to the band’s Apple Records, Dolenz was friends with the band, and Rundgren has popped up in Ringo Starr’s All Starr Band throughout the years, though it’s certainly a motley crew to take on the road to honor the “White Album.”

Nothing could get better than this! Don't wait for another fifty years for this to happen, book your tickets now!