There are musicians, and there are storytellers.  Get the best of worlds from Graham Nash.  Experience his deeply moving songs and  life-stories that remain relevant to this day.  Alongside his hectic tour with folk-rock supergroup Crosby, Stills, and Nash (CSN), Nash takes time to be on his own for series of rare solo performances.  Spend “An Evening With Graham Nash” at the Westbury Music Fair, New York, on September 22, 2013.  Show starts 8:00 pm. 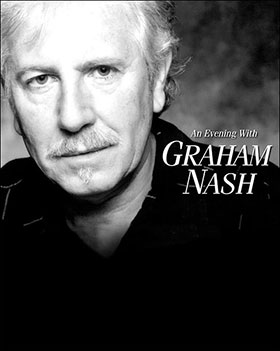 The name Graham Nash is synonymous with iconic groups The Hollies and Crosby, Stills, Nash, and Young (CSNY).  In the 60s, he was part of the significant music-movement called ‘the British invasion’, as his band The Hollies took a firm grip on the charts worldwide with hits like “Bus Stop”, “He Ain’t Heavy, He’s My Brother”, “Tell Me to My Face”, “Look Through Any Window”, and many more.  In the late 60s, after a fateful meeting with David Crosby in the US, and Nash’s apparent change in musical direction, the band Crosby, Stills, and Nash was formed — with Stephen Stills completing the triumvirate.  The group later became a foursome as Neil Young joined-in.  From there, his song grew to express his activism and socio-political standpoint, yet still gained great commercial success.  Hits like “Our House” and “Teach Your Children” were chart-toppers and widely used in TV commercials and films.

Graham Nash is an appointed officer of the Order of The British Empire for his influence and contribution to music and charity.  Nash was inducted to the Rock and Roll Hall of Fame in 1997 under Crosby Stills, and Nash, and in 2010 as member of The Hollies.

An evening with one of the most influential music icons is not just an evening well-spent, but an experience to be cherished.  This is a live and rare opportunity not to be missed.  Get your tickets now!