The genius mind behind one of popular music’s most notable songs, “American Pie”, comes to NYCB Theatre at Westbury on Saturday 8th September 2018! Iconic singer-songwriter Don Mclean will be performing songs from his catalog of twenty incredible folk-rock albums, including tracks such as “Vincent (Starry Starry Night)” and “Crying”! Mclean will be joined by country-rock band Pure Prairie League! 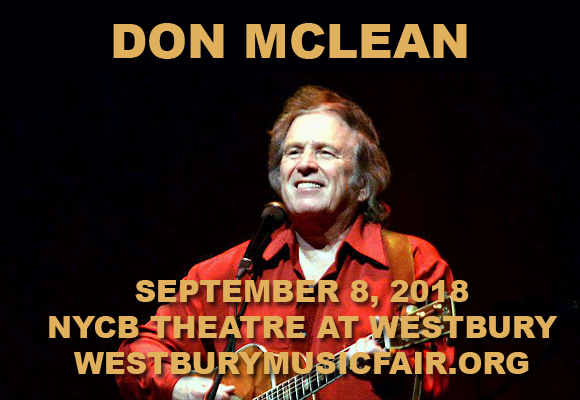 Best known for his 1971 hit single “American Pie”, Don Mclean is an American singer-songwriter. Mclean cut his teeth in the folk clubs of New York, Washington D.C. And Los Angeles, later signing to a small label – Mediarts – with whom he released his debut album, Tapestry (1969). Mediarts went on to be taken over by United Artists Records, securing Mclean’s second studio album, American Pie, major label promotion. The album’s title song and “Vincent”, another single, went to Number One. “American Pie” went on to be listed as the Number Five song on the RIAA project Songs of the Century and in 2017 it was selected for preservation in the National Recording Registry by the Library of Congress as being “culturally, historically, or artistically significant”. Mclean has released twenty studio albums to date.