Take a trip down memory lane with three of the biggest teen idols of the late 1950s/early 60s as Dick Fox’s Golden Boys comes to NYCB Theatre at Westbury on Saturday 1st October 2016! Be swept up in the romance of reminiscence as phenomenal crooners Frankie Avalon, Fabian and Bobby Rydell delight and entertain with hit after golden hit! These consummate showmen are as talented and captivating now as they were 50 years ago – don’t miss your chance to see them live! 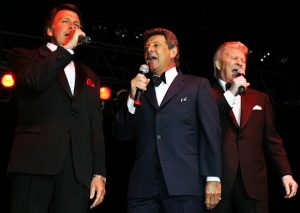 “Just how long can a teen idol remain an “idol” to fans? Judging by the Dick Fox’s Golden Boys show with Fabian, Bobby Rydell and Frankie Avalon that Friday played at Sands Bethlehem Event Center, pretty much forever – or at least as long as there are people who remember the idols and their songs.”