Get ready for a nostalgic evening of incredible entertainment as the Legendary Voices Tour touches down at NYCB Theatre at Westbury on Friday 20th April 2018! Legendary Voices features “King of the Twist” Chubby Checker, founding member of the The Supremes Martha Reeves, and iconic Motown singer Martha Reeves, bringing you all your favorite hits from the Sixties and beyond! These legends will have you dancing all the way down memory lane! 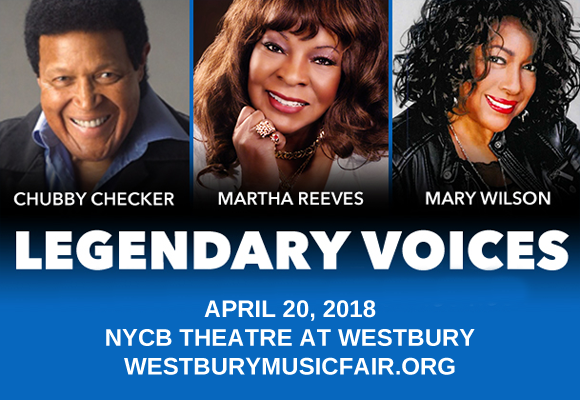 American singer and dancer Chubby Checker is known for popularizing the twist dance style, with his 1960 hit cover of Hank Ballard’s R&B hit “The Twist”, which was named by Billboard as the  biggest chart hit of all time and is the only song in the rock ‘n’ roll era to hit #1 on the pop charts on two separate occasions (’60 and ’62). The only recording artist to place five albums in the Top 12 at once, Checker also had hits with “Limbo Rock”, “Pony Time”, “Twist It Up”, “The Fly”, “The Class” and “The Hucklebuck”.