"Sailing". "Arthur's Theme (Best That You Can Do)". "Think of Laura". … You can't help but hum along to these tunes in your head right now… Then why not listen to these gem of hits once again at a magnitude of live concert?! Christopher Cross, the legendary singer-songwriter behind these timeless classics will take you on a cruise along the waves of his biggest hits as he top bills a live concert performance at the NYCB Theatre at Westbury on Saturday 11th April 2020. Don't miss the boat! Make sure you book those tickets just in time. Look for that 'get tickets' link on this site and be swept away! 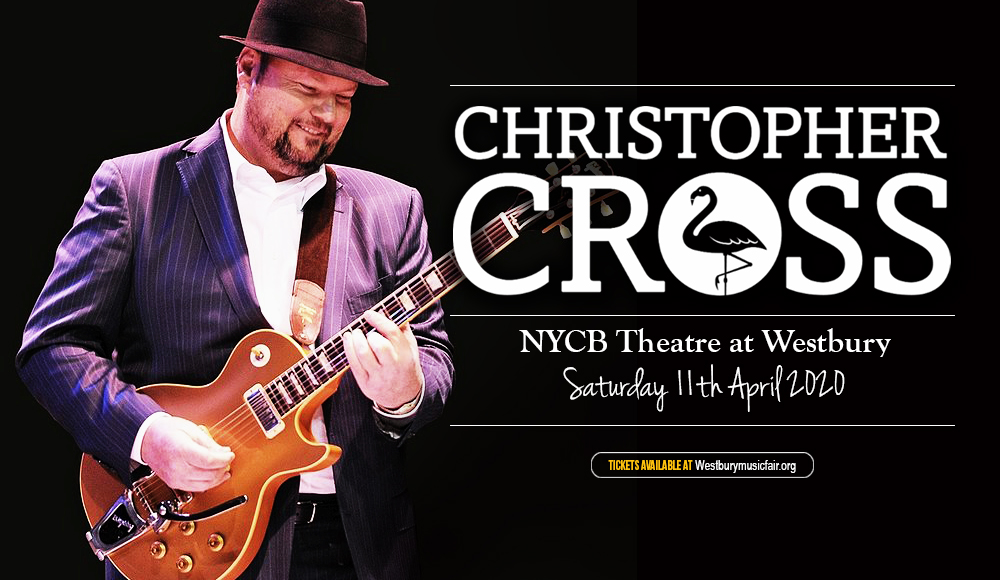 It could possibly an unknown fact that thirty nine years before Billie Ellish's major Grammy Awards win sweep, it was Christopher Cross who won all four general field awards in a single ceremony, bringing home Record of the Year ("Sailing"), Album of the Year (Christopher Cross), Song of the Year ("Sailing"), and Best New Artist at the 23rd Annual Grammy Awards in 1981. Yet Cross went home with more. He additional Grammy in 1981 for Instrumental Arrangement for "Sailing," winning a total of five Grammys that night.

Christopher Cross may not sound as the artist usually described as an 'overnight sensation', or had a 'meteoric rise to fame' kind of artist. He was a genuine talent who made heartfelt, easy-listening music that filled the airwaves. Apart from his impressive Grammy wins, Christopher Cross has a total of 15 studio albums to his name. The singles "Sailing" (1980), and "Arthur's Theme (Best That You Can Do)" (from the 1981 film Arthur) peaked at number one on the U.S. Billboard Hot 100. These songs were not only global monster hits, but have proven to be timeless classics.

Christopher Cross, his self-titled debut album just hit the 40th year mark this 2020, then what better way than to celebrate it with a live concert tour!

"This tour celebrates the first chapter in what has been my life's journey," Cross says. "I look forward to seeing everyone on the road."

Join this journey where Cross will be taking his fans on a cruise along his biggest hits — "Sailing," "Never Be the Same," "Ride Like the Wind," "Say You'll Be Mine" "Arthur's Theme – The Best That You Can Be," "Swept Away", "Think of Laura", and many more. Book your tickets now!