Carrot Top "Laugh Until You're Orange In The Hair" Tickets

Other comedians can make you laugh until your face hurts. Beware of Carrot Top, his brand of comedy will make you 'Laught Until You're Orange In the Hair"! This is comedy to the extreme. Catch Carrot Top on his one-night-only show at the NYCB Theatre at Westbury on Thursday 6th November 2014. Tickets are available yet moving fast, they're selling like carrots! Book those tickets now. 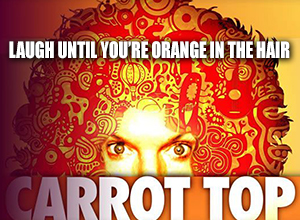 Quick-witted. Fast-paced. Hyperactive. Carrot Top makes you laugh in flash. His punch-lines are delivered in a snap yet hits you hard on the face. And before you know it, you're laughing so hard that it feels like your hair would turn orange. Carrot Top's humor is out-of-the-box, literally. Yes he carries a treasure-chest-full of props, wacky inventions, things, and thingamajigs that elicits shrills, thrills, and guffaws.

Carrot Top a.k.a. Scott Thompson has made numerous appearances on television shows like Scrubs, Larry the Cable Guy's Christmas Spectacular, Gene Simmons Family Jewels, Reno 911, CSI, Chris Angel’s Mind Freak, the George Lopez Show, Tosh.0, Cash Cab, and many others. He also dabbled on the silver screen with special roles in blockbuster movies like Chairman of The Board, The Hangover, among others.

Carrot Top's "Laugh Until You're Orange In The Hair" will be on a very limited run only so hurry and get those tickets now!