It’s time to get into the swing of the holiday season with the Brian Setzer Orchestra on their 14th Annual Christmas Tour! NYCB favorites, this rockabilly big band will jingle your bells, so make sure you catch them when they hit the theatre on Wednesday 22nd November 2017 for a night of jazzed up holiday classics! Don’t be a scrooge – get in the groove! 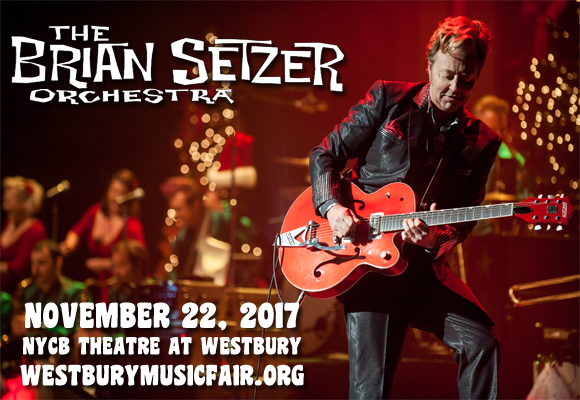 3-time Grammy Award-winning singer, songwriter and guitarist Brian Setzer’s career first began in the late 1970s as founder and frontman of Stray Cats, whose unique take on rockabilly found them widespread success throughout the 1980s. Setzer sold 13 million records and was presented with the Orville H. Gibson Lifetime Achievement Award while he was with Stray Cats. After his time with the group ended, Setzer took a dramatic change in musical direction, starting swing-revival band The Brian Setzer Orchestra, who had a hit on the Billboard singles chart with its cover version of “Jump, Jive an’ Wail” by Louis Prima.