One of the greatest voices of all time, Aretha Franklin, comes to NYCB Theatre at Westbury on Saturday 2nd June, 2018 for an unforgettable and intimate evening of beloved songs sung by a true artist! From “Respect” to “Chain of Fools”, Franklin’s incredible catalog of chart-topping hits is second-to-none, and prove that she truly is the Queen of Soul! Don’t miss your chance to see this captivating, one-of-a-kind performer live! 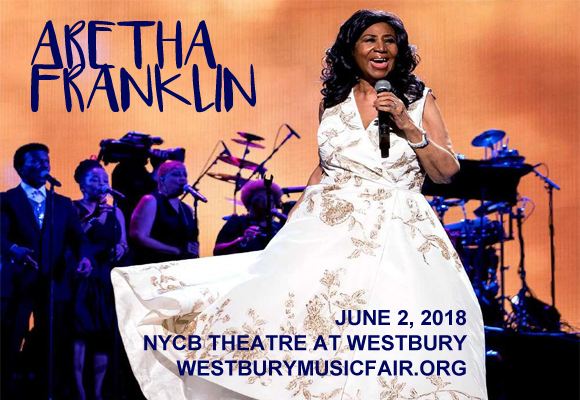 Eighteen-time Grammy Award-winning singer and songwriter Aretha Franklin is one of the world’s best-selling artists of all time and was the first female performer to be inducted into the Rock and Roll Hall of Fame in 1987. After a childhood of singing gospel music, Franklin first embarked on a secular singing career in 1960 at the age of 18, signing with Columbia Records and charting her first Bliboard 100 hit, “Won’t Be Long”, in 1961. After signing to Atlantic Records six years later, she released the top-selling albums, Lady Soul and Aretha Now in 1968, launching some of her most popular hit singles including “Chain of Fools”, “Ain’t No Way”, “Think” and “I Say a Little Prayer”. The most charted female artist in Billboard’s history, Franklin has charted a total of 112 singles on Billboard, including 77 Hot 100 entries, 17 top ten pop singles, 100 R&B entries and twenty number-one R&B singles.