Favorites of NYCB Theatre at Westbury, Australian soft rock duo Air Supply will be performing on Friday 2nd August 2019! The beloved two-piece will be performing a selection of their incredible, chart-topping hits, including “Lost in Love”, “Love and Other Bruises” and “All Out of Love”! The veteran performers, who took the world by storm in the 1980s, are masters of their craft that always put on a second-to-none show with their rousing power ballads! 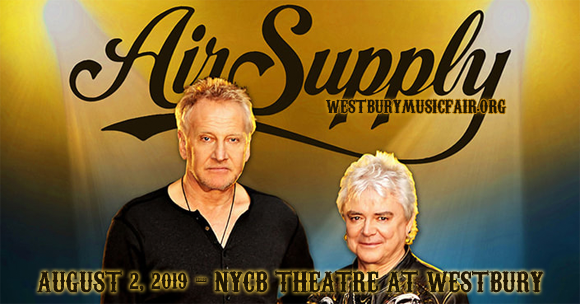 Formed in 1985, Austrailian soft rock duo Air Supply consists of singer-songwriter and guitarist Graham Russell and lead vocalist Russell Hitchcock. The pair found fame throughout the 1980s with a succession of worldwide hits, including eight US top ten hits. Their most famous single, “All Out of Love”, reached the top ten in the US, Australia, France, Ireland and Canada, and remains a radio staple to this day. In 2013, at the annual ARIA Awards, Air Supply was inducted into the ARIA ( Australian Recording Industry Association) Hall of Fame.