Multi-award-winning Hollywood actress and legendary comedian Whoopi Goldberg comes to NYCB Theatre at Westbury on Friday 26th October, 2018! An intimate audience with the larger-than-life star, this comedy night out will be full of anecdotes and hilarity from the iconic Sister Act performer, whose presence alone is worth a ticket! Don’t miss your chance to see this comedic master at work! 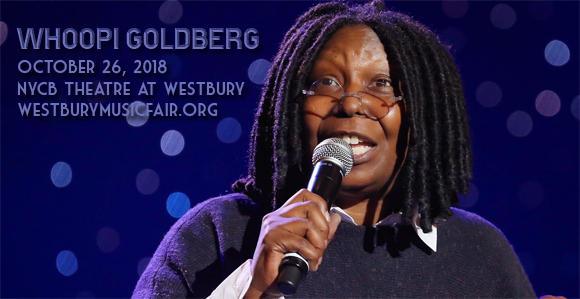 American actress, comedian, author, and television host Whoopi Goldberg is one of only a few entertainers to win an Oscar, a Grammy, a Tony, and an Emmy award. In total, Goldberg has won thirteen Emmy Awards for her television work and she was the second black woman in the history of the Academy Awards to win an acting Oscar. Goldberg made her breakthrough in 1985 in the Steven Spielberg film The Color Purple, which was later nominated for eleven Academy Awards, including a nomination for Goldberg as Best Actress. In addition to her film work, Goldberg has made a name for herself over the years as a comedy icon, winning a Grammy Award for Best Comedy Recording in 1985 for “Whoopi Goldberg: Direct from Broadway,” becoming only the second woman at the time to receive the award, and the first African-American woman.