Chart-topping country artist Trace Adkins is coming to NYCB Theatre at Westbury on Thursday 22nd March 2018 for a night of All-American country music! Performing songs from his latest album, Something’s Going On, the Grand Ol Opry singer will touch your heart and get your toes tappin’ – don’t miss your chance to see this incredible talent! 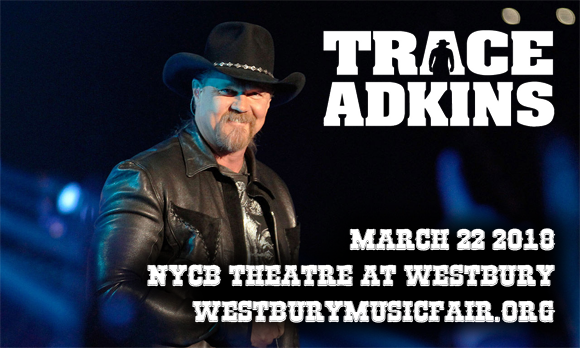 American singer, songwriter and actor Trace Adkins released his debut album, Dremin’ Out Loud, In 1996 on Capitol Records and came to prominence two years later on the PBS music program Austin City Limits. To date, Adkins has released eleven studio albums and two Greatest Hits compilations, charting more than 20 singles on the Billboard country music charts, including the Number One hits “(This Ain’t) No Thinkin’ Thing”, “Ladies Love Country Boys”, and “You’re Gonna Miss This”. All but one of Adkins’ studio albums have been certified gold or platinum in the United States, with his highest-selling to date, 2005’s Songs About Me, receiving double-platinum certification for shipping two million copies.