R&B queen Toni Braxton is coming to NYCB Theater at Westbury on Thursday 10th November as part of her Hits Tour! The “Unbreak My Heart” singer will be performing some of her biggest songs from over the years, showcasing her incredible voice and the tunes that have peppered her illustrious career! Come celebrate one of the most admired voices in R&B and let the seven-time Grammy-winning songstress remind you why she’s a star! 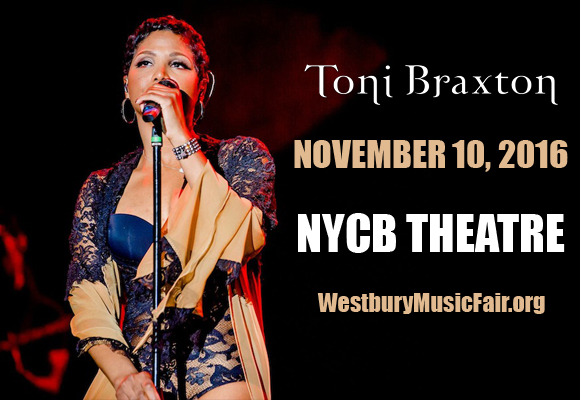 Toni Braxton is an American R&B singer, songwriter, pianist, record producer, actress, television personality, and philanthropist, who burst on the scene in 1993 with the release of her smash hit eponymous debut album. The album sold over ten million copies worldwide, and earned Braxton three Grammy Awards, including Best New Artist. Secrets, her second album, was released in 1996 and continued her popularity, selling over fifteen million records and earning two Grammy Awrds. The album’s most popular single, Un-Break My Heart, became Braxton’s signature song, and the second top-selling single of all time by a female artist. Braxton went on to release four more studio albums, and win two more Grammy Awards. To date, she has sold over 67 million records, including 41 million albums, worldwide, and in addition to her seven Grammys, has won nine Billboard Music Awards, seven American Music Awards and several other awards.