Join two of Motown's biggest groups, The Temptations and The Four Tops, for a night of fantastic music from these phenomenal veteran vocal sensations! Coming to NYCB Theatre at Westbury on Saturday 16th March 2019, these iconic harmony bands changed the shape of music as we know it, and had a vast array of chart-topping hits that everyone knows and loves – from generation to generation! 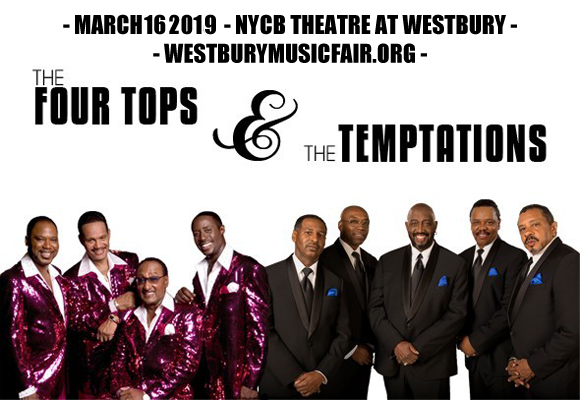 Detroit, Michegan's Motown Sound of the 1960s was in part defined by two of Motown Records' most famous vocal groups, The Temptations and The Four Tops. The Four Tops came together in 1953 and have been responsible for 41 Billboard Hot 100 hits throughout their career, including the number one singles "I Can't Help Myself (Sugar Pie Honey Bunch)" in 1965 and "Reach Out I'll Be There" in 1966. The group was into the Rock and Roll Hall of Fame in 1990 and they were awarded the Grammy Lifetime Achievement Award in 2009. Pioneers of psychedelic soul, The Temptations have launched  four Billboard Hot 100 number-one singles and fourteen R&B number-one singles throughout their career, including "My Girl" (1964), "Just My Imagination (Running Away with Me)" (1971), and "Papa Was a Rollin' Stone" (1972). The Temptations were the first Motown recording act to win a Grammy Award (for their 1969 hit "Cloud Nine") and in 2013 they also received the Grammy Lifetime Achievement Award. In 1989, six members of the Temptations (Dennis Edwards, Melvin Franklin, Eddie Kendricks, David Ruffin, Otis Williams and Paul Williams) were inducted into the Rock and Roll Hall of Fame.