A show which dazzles and delights with the Motown Sound of yesteryear, catch The Temptations and The Four Tops at NYCB Theatre at Westbury on Friday 9th March 2018! These iconic bands will be performing all the incredible hits that launched them to stardom, including: “I Can’t Help Myself (Sugar Pie Honey Bunch)”, “Reach Out I’ll Be There”, “My Girl”, “Just My Imagination (Running Away with Me)”, “Papa Was a Rollin’ Stone” and many more! 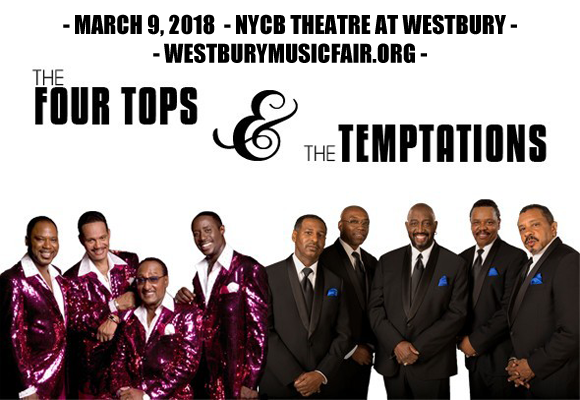 Two of Motown Records’ most famous vocal groups, The Four Tops and The Temptations were responsible for some of the biggest hits of the sixties, defining the label’s sound and changing the face of R&B! The Temptations went on to score 14 R&B number one hits and have been awarded three Grammy Awards, and The Four Tops were inducted into the Rock and Roll Hall of Fame in 1990 and were awarded the Grammy Lifetime Achievement Award in 2009. Together, these incredible bands established the Motown Sound, and they continue to be just as relevant and entertaining after nearly five decades in the industry.