Get ready for a once in a lifetime opportunity to see 'The King' rock the building! Witness not one, but two world famous tribute artists pay homage to the King of Rock n' Roll, Elvis Presley. Cody Ray Slaughter will be here as well as the BBC1 winner of the “World’s Greatest Elvis”, Shawn Klush, the closest thing to the original 1960's star himself! Catch them both LIVE at NYCB Theatre at Wesbury on Friday 21st August 2015! 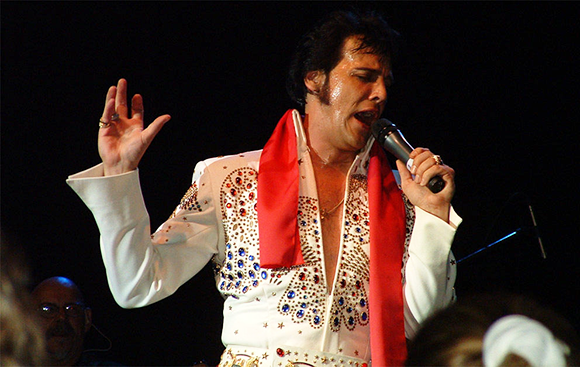 It's any Elvis Presley fan's dream to hear the classic songs performed live in concert and now you can! With two of the greatest tribute acts in the whole world!

Shawn Klush has been touted many times as 'the closest to The King in concert'. Before making it and getting into a professional career as an Elvis impersonator, Klush has bested several wannabe-Elvis tribute artists, in several prestigious contests. He won the “Worldwide Elvis Competition” in Montreal in 2005; and became $25,000 richer for bagging the grand champion award in the “World Elvis Tribute Artist Competition”. In 2007, the BBC awarded him as World's Greatest Elvis, in a competition held in the United Kingdom. And this year, he is the reigning Gibson Guitar's 'People's Choice' awardee as “Best Concert Elvis”.

Cody Ray Slaughter. In 2011, The Elvis Presley Enterprises named him as their Ultimate Elvis Tribute Artist, the youngest man so far to receive such an award. He has also portrayed the young Elvis Presley in stage shows and musical shows which include Tony Award winning hit musical 'The Million Dollar Quartet'.