Join two iconic performers of the 1960s and ’70s, as firm friends and former lovers Stephen Stills and Judy Collins team up for an unforgettable night of music! Catch these two incredible talents reunited on Saturday 26th August 2017 at NYCB Theatre at Westbury! 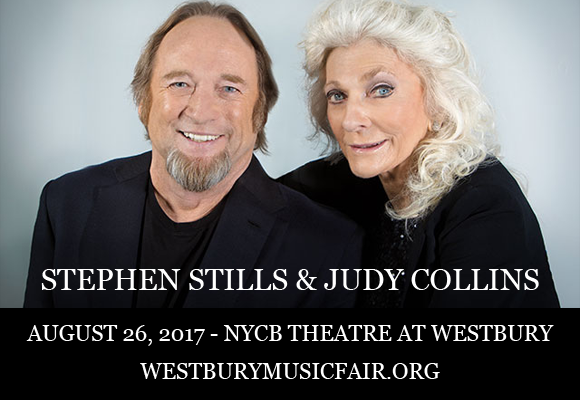 American singer and multi-instrumentalist Stephen Stills is best known for his work with Buffalo Springfield and Crosby, Stills, Nash & Young, as well as for his successful solo career. Nash’s eponymous debut solo album went gold and is the only album to feature both Jimi Hendrix and Eric Clapton, and the combined sales of his bands and solo career are over 35 million albums to date.

American singer and songwriter Judy Collins found fame throughout the 1960s and ’70s for her renditions of popular songs, choosing an eclectic mixture of material, from folk songs to show tunes. Her first hit was with Joni Mitchell’s “Both Sides Now,” which hit the Top 10 on the Billboard Pop Singles chart and won Collins her first Grammy Award for Best Folk Performance.

Stills and Collins were known as a couple in the late 1960s, and Stills’ song “Suite: Judy Blue Eyes” was written for her.