"Back by popular demand!" has always been the tagline of his shows. Well, it's because that's the way it is. Time and time again, long-time and newfound fans flock to his shows, and at the end of the tour, they're already anticipating the next round. That is the staying power of singer-songwriter-music icon Paul Anka. This year, Paul Anka will take center stage at of the NYCB Theatre at Westbury on Friday 15th May 2020, to reprise one of his most successful concert series — "Anka Sings Sinatra- His Songs, My Songs, My Way". Anka and Sinatra's fans are definitely going as a united front, so expect tickets to move on the double. Here's a quick way to buy tickets…Just click on that 'get tickets' link on this site. Book those tickets right here, right now! 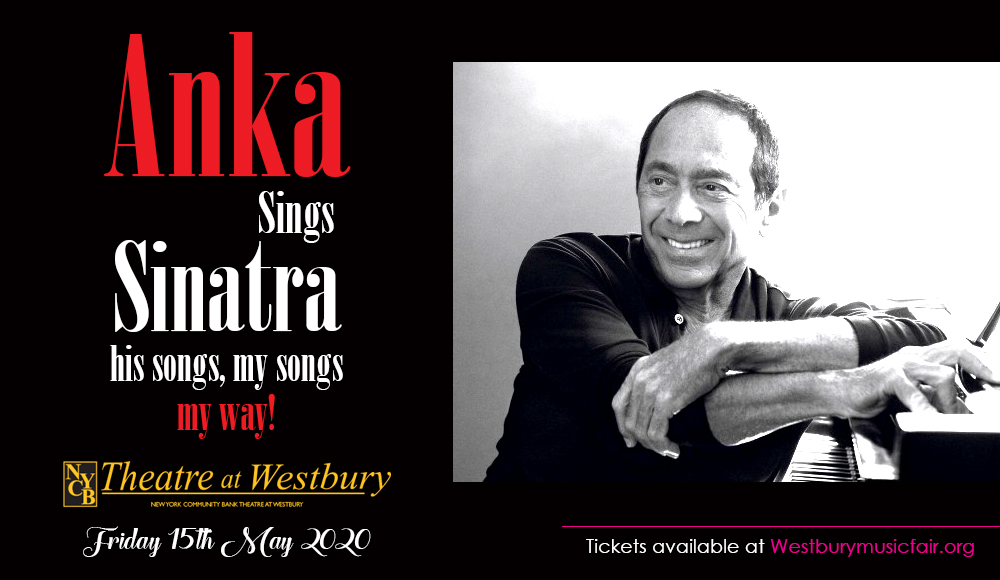 Paul Anka expressed how this concert in particular, is extra special and why this concert series is revisited by fans almost year in and year out. "…The Anka Sings Sinatra tour will honor a great artist who has influenced me more than anyone else throughout my career, Frank Sinatra. It will also feature the hits that have spanned my career on this 60th anniversary year. It will be a night filled with his songs, my songs, my way!”

Frank Sinatra and Paul Anka are like hand and glove. The everlasting anthem "My Way" is that unbreakable thread that joins their careers together. Old Blue Eyes breathe immortal life into the song, and Paul Anka gave his heart and soul that came out through words and music.

Apart from being a prolific songwriter, Paul Anka is a bonafide iconic superstar. He started out as a teen pop idol who zoomed his way up the charts with his biggest hits "Diana", "Lonely Boy", "Put Your Head on My Shoulder", and "(You're) Having My Baby". He has a 900-song catalog which includes such titles as "She's a Lady" (Tom Jones), "Puppy Love" (Donny Osmond), "It Doesn't Matter Any More" (Buddy Holly) and "Teddy" (Connie Francis). He has been nominated and received the Juno Award for Composer of the Year (an award given for songwriting) many times over and has also been inducted to Canadian Music Hall of Fame in 1980.

Paul Anka's formidable talent and his enduring integrity and artistry are what make fans keep coming back… Indulge yourself in a concert that would truly make you marvel at the magic of music. Book your tickets now!