Enjoy an evening with actress, television host, producer, equestrienne and philanthropist Melissa Rivers, as she dedicates an evening to all things Joan Rivers! Coming to NYCB Music Theatre at Westbury on Thursday 30th November 2017, Rivers will be sharing from her new book Joan Rivers Confidential: The Unseen Scrapbooks, Joke Cards, Personal Files, and Photos of a Very Funny Woman who Kept Everything! 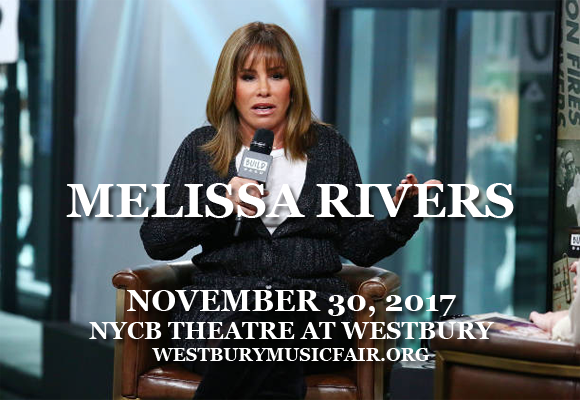 American actress, television host, producer, equestrienne and philanthropist Melissa Rivers is the daughter of comedian Joan Rivers and producer Edgar Rosenberg. Rivers began her career acting for television in shows including Beverly Hills, 90210, Silk Stalkings and The Comeback. She began working for E! In the early 1990s as a red carpet interviewer and a host of several shows, including two of the channel’s highest-rated specials: Oh Baby! Melissa’s Guide to Pregnancy[8] and Oh Toddler! Surviving the Early Years (aired in January 2002). She hosted fashion on the red carpet interviews for the E! cable network with her mother, and the two later accepted a lucrative deal with the TV Guide Channel valued at between $6 and 8 million. Rivers was a co-creator and co-producer of Joan’s YouTube web series In Bed With Joan in 2013.