If laughter is said to be the best medicine, then this will be at the top of your doctor's prescription! Get mega-doses of laughter, as well as a musical entertainment showcase at the Long Island Comedy & Music Festival. This show will not only make you laugh-out-loud. It's a show supports the fight against breast cancer. Celebrate the healing powers of smiles and music. Celebrate life! Catch this year's all-star cast, one-night-only performance at the NYCB Theatre at Westbury on Saturday 25th October 2014. 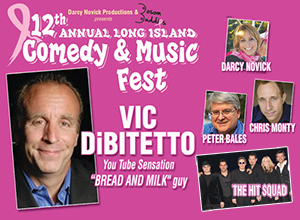 Darcy Novick is a breast cancer survivor. For over a decade now, she has dedicated her life in spreading the healing powers happiness, faith, love, laughter and music. Her company Bosom Buddies, have taken up the cudgels to organize a yearly festival that highlights comedy and music. Hence, the Long Island Comedy and Music Festival has become an annual campaign and a tradition. Now on its 12th year, the comedy and musical extravaganza showcases a nonpareil line-up of stand-up comedians and musical talents.

This year's line-up is no exception. Check-out these stars that would light up the stage with their high-voltage and intense punch-lines:

VIC DIBITTETO – YouTube sensation, "Bread and Milk guy" fame
DARCY NOVICK – the producer of the show also the Princess of LI Comedy
PETER BALES – as seen on AE, VHI, and FOX
CHRIS MONTY – from the hit off-Broadway play "Shut Up, Shut Down, and Eat!"
THE HIT SQUAD – the music machine who can pull-off great versions of hits by The Bee Gees

In this show, you won't die laughing. You'll celebrate life with fun, laughter, and music. It will add more years to your life and bring you and your family wonderful memories. Now isn't that better?