With 26 number-one hit singles and 11 Grammy Awards under his belt, Kenny “Babyface” Edmonds is one of the biggest names in R&B! Coming to NYCB Theatre at Westbury on Sunday 14th January 2018, the soulful hitmaker will be performing fan favorites from his illustrious career, and will be joined for the evening by 112 and Avery Sunshine! 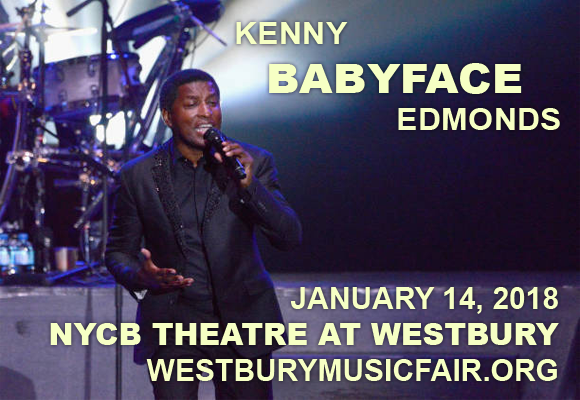 American singer, songwriter and record producer Kenny “Babyface” Edmonds has written and produced 26 number-one R&B hits throughout his career, and has won 11 Grammy Awards. First making his name in the 1980s writing for artists including  Bobby Brown, Karyn White, Pebbles, Paula Abdul, Michael Jacksonand Sheena Easton, Babyface went on to write and produce several songs for TLC’s second album CrazySexyCool, which became the best selling album of all time by an American girl group. As a solo artist in his own right, Babyface has released eight studio albums, and in 2014 released a Grammy Award-winning duet album with Toni Braxton titled Love, Marriage and Divorce.