Blues-rock guitarist, singer, and songwriter Joe Bonamassa will take on not one but two nights at the NYCB Theatre at Westbury, with his second slated on Saturday 19th March 2022. Just like any other artist who has been actively touring for decades, this guitar virtuoso began to question his artistic purpose. “It was like okay, what are you? Am I a guitar player? No. Am I a singer? No. Songwriter? No. I’m an entertainer,” he said. “The three things I just described feed into the one thing I think I’m actually good at, which is entertaining.” Now with renewed vigor and a brand new album "Time Clocks" in tow, Bonamassa is truly in his element to kick out the blues and give his fans a helluva grand time! Clock is ticking… time to book your tickets now! 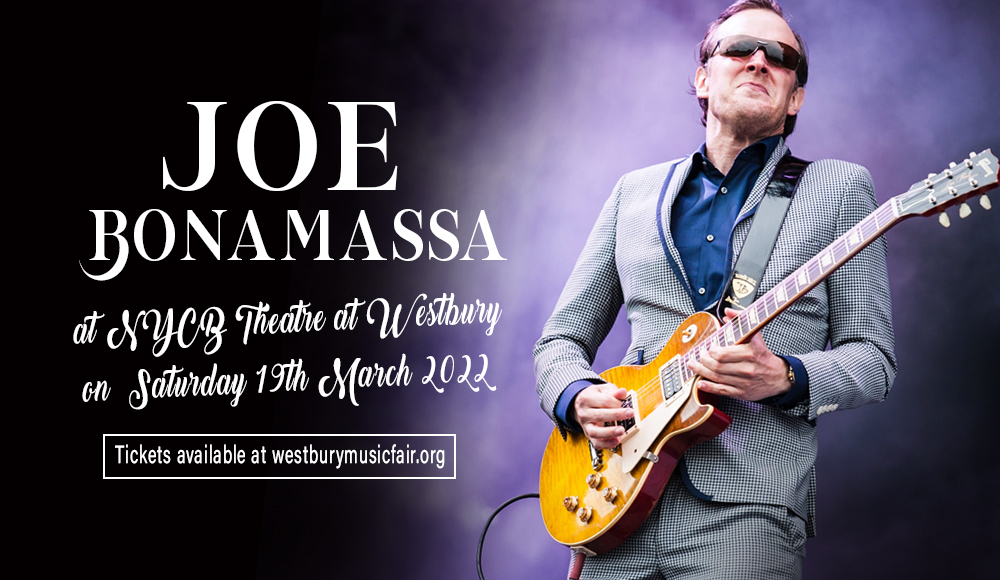 When blues grand maestro B.B. King himself handpicks a twelve-year-old blues guitar player to be his opening act for 20 shows, then that kid truly has a big and long future ahead… Joe Bonamassa has been living that dream and fulfilling it with best-selling records, collecting career milestones, awards, and earning the respect of peers as well as the adulation of legions of fans all over the world.

Joe Bonamassa is a child prodigy who started playing guitar at age four, and by age 11, he founded and fronted his own band called Smokin' Joe Bonamassa. Before he reached 18 years old, Bonamassa was playing in a band called Bloodline with the sons of Miles Davis, Robby Krieger, and Berry Oakley.

Eventually, he established his own indie label J&R Adventures, releasing 15 solo albums, with a career total of 24 albums hitting number 1 on the Billboard Blues charts. This year, his brand new album "Time Clocks" is the latest addition to his amazing discography.

Apart from highly distinguished career recognitions which include two Grammy Awards, Guitar International’s 2011 “Guitarist of the Year,” “Breakthrough Artist of the Year” at the 2009 Classic Rock Roll of Honour Awards in England, No. 48 in Guitar World’s 100 Greatest Guitarists of All Time, and Billboard’s No. 1 Blues Artist of 2010, Bonamassa is truly lauded by the press who have called him…

"The best guitarist on the planet at the very top of his game." – Liverpool Echo

"Arguably the world's consummate Blues guitarist and its greatest exponent didn't just rock the joint he simply blew the roof off." – Reading Chronicle

Take some time off to catch this blues guitar god as he slides his way down the NYCB Theatre at Westbury on Saturday 19th March 2022. Hurry, book your tickets now!