You’ve got not one, but two 60’s music icons all in one night!  Jay Black (of Jay Black And The Americans) and Bill Medley (of The Righteous Brothers) performing the most-loved hit songs that marked the music of the 60s and beyond.  Jay Black and Bill Medley are topping and sharing the bill for a one-night only performance at the Westbury Music Fair in New York on the 3rd of November 2012;  show starts at 8:00 pm. 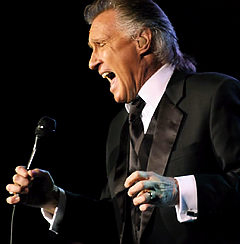 “You never close your eyes anymore when I kiss your lips…”   One of the most iconic pop songs that has lived on for generations.  “You’ve Lost That Loving Feeling”  was one of The Righteous Brothers’ biggest hits, re-recorded by so many artists and featured in a number of movie soundtracks.  Bill Medley is known as the other half of the duo The Righteous Brothers, whose career flourished in the 60s, with other hits like “Unchained Melody” (also theme song from the movie “Ghost”), “(You’re My) Soul and Inspiration”, among many others.  Bill Medley embarked on a solo career in 1968, yet his remarkable and another iconic comeback in 1987 was through the hit “(I’ve Had) The Time of My Life”, a duet with Jennifer Warnes, and was used as the main theme of the movie “Dirty Dancing”.

Jay Black’s career was at its peak during the 60s for his stint as songwriter and lead vocalist of the group Jay and The Americans.  They had a string of hit singles to their name, which include “Cara Mia”, “Come a Little Bit Closer”, and “This Magic Moment” .

This twin bill concert will not only take you down memory lane, it guarantees to give you the time of your life!  Don’t miss, buy your tickets now!