Renowned singer-songwriter Jackson Brown returns to NYCB Theatre at Westbury on Sunday 20th May 2018 for an intimate evening of intricate melodies and inspired lyrics as he performs songs from throughout his incredible career! Browne will be joined by talented multi-instrumentalist Greg Leiz for a very special evening that showcases two exceptional musicians! 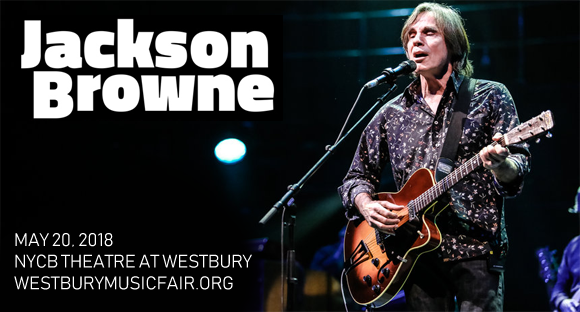 American singer-songwriter and musician Jackson Browne began his music career in the late 1960s as a songwriter and backing musician for other artists, including Tim Buckley and Nico, of the Velvet Underground, with whom he was romantically linked. Browne’s debut solo album, Jackson Browne, was released on Asylum Records in 1972 and helped him gain public recognition as an artist in his own right. Browne is best known for the singles “These Days”, “The Pretender”, “Running on Empty”, “Lawyers in Love”, “Doctor My Eyes”, “Take It Easy”, “For a Rocker”, and “Somebody’s Baby”, and has sold over 18 million albums in the United States to date. He was inducted into the Rock and Roll Hall of Fame in 2004.