It’s time to raise hell as “Redneck Woman” Gretchen Wilson brings the party to NYCB Theatre at Westbury on Friday 4th August 2017! Wilson is “Ready to Get Rowdy,” much like her album of the same name, bringing you the driving rock-tinged country music that she’s known for – there’s no hiding in the corner for this show! 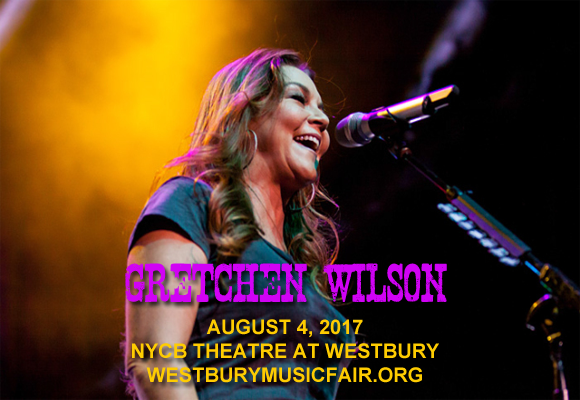 American singer and songwriter Gretchen Wilson burst onto the country music scene in 2004 with her Billboard country chart number one, Grammy Award-winning single “Redneck Woman”. The single was launched from Wilson’s debut album Here for the Party, which was certified 5× Multi-Platinum by the RIAA for sales of five million copies. Her 2005 follow-up album, All Jacked Up was certified platinum and its title track became the highest-debuting single for a female country artist that year. To date, Wilson has charted 13 singles on the Billboard country charts, with five of them reaching the Top Ten: the Number One “Redneck Woman”, as well as “Here for the Party” (#3, 2004), “When I Think About Cheatin'” (#4, 2004), “Homewrecker” (#2, 2005), and “All Jacked Up” (#8, 2005).