The melodious voices of Orlando, Antonio, Morgan, Kalen, Joe, and RJ, collectively known as DCappella, will echo the walls of NYCB Theatre at Westbury this Saturday, December 17, as the renowned group brings their “Deck the Halls with Disney Tour,” to New York’s famous theater. Be enthralled by the harmonious voices of this award-winning group in a family night-out that will take you through a musical journey featuring a wide array of Disney songs from renowned movies like Encanto, The Little Mermaid, The Lion King, Aladdin, and much more! Kick off your holiday season with this wholesome concert of Disney’s premier a cappella singing sensation. Book your tickets as early as today. Hit the “Get Tickets” button for a fast and safe transaction. 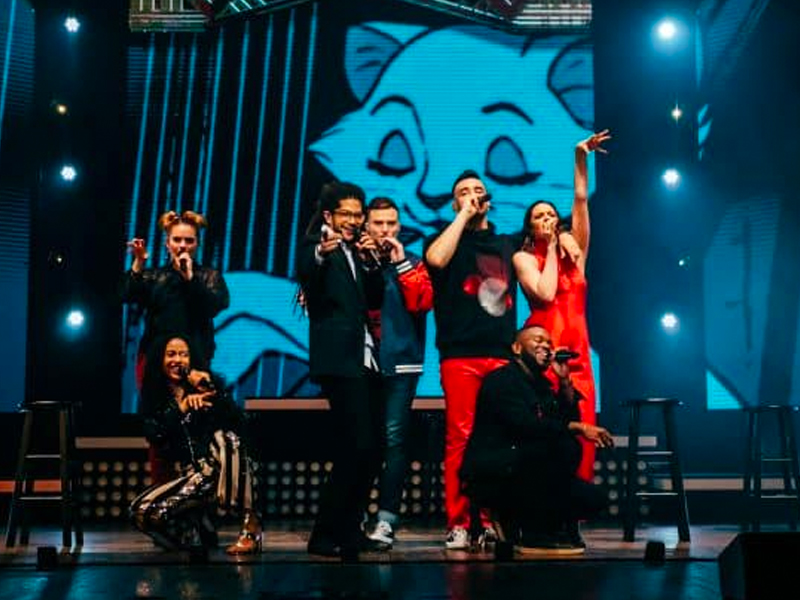 Known to perform materials largely culled from Disney-related projects, Dcapella is an a cappella ensemble consisting of six members ranging from bass to soprano and includes a vocal percussionist. From the original 14 members hand-picked from talent competitions like The Voice and The Sing-Off, only six members are now active in the group. The culling of members was the decision of the group’s director Deke Sharon, a contemporary a cappella pioneer who also acts as the group’s music arranger. The group’s current members include Orlando Dixon (Baritone), Antonio Fernandez (Vocal Percussion), Morgan Keene (Soprano), Kalen Kelly (Mezzo), Joe Santoni (Bass), and RJ Woessner (Tenor).

The group first debuted in 2018 with the catchy cover of Fall Out Boy’s “Immortal.” The song was on the soundtrack of the movie “Big Hero 6.” They also contributed four songs to the soundtrack of the superhero Disney film, “Incredibles 2.” In that same year, DCappella made their live TV debut, appearing on a Disney-themed episode of the hit reality TV singing competition, American Idol. Since then, things have become brighter for the group who had found themselves busy performing all over North America and even in other countries. In fact, they have completed a 40-city tour through North America and Canada, and they sold out an 18-city series of shows in Japan.

This year, DCappella will be embarking on another tour dubbed “Deck the Halls with Disney featuring DCappella.” The group will hit the road later this year to kick off the holiday season with a series of classic holiday song performances, as well as a wide array of Disney song hits. Catch the incredible group in their New York stop this Saturday, December 17. Grab your tickets for the show, and be sure to secure one for each family member because this is a show that all Disney lovers will enjoy.