#1 New York Times bestselling author Chelsea Handler comes to NYCB Theatre at Westbury on Saturday 29th June 2019 on a new tour in support of her latest book, called Life Will Be the Death of Me: Chelsea Handler’s Sit-Down Comedy Tour! The comedian, actress, talk show host, writer and activist will take the audience through a gamut of emotions as she shares details of her life from her recently released memoirs! Get ready for an intimate view into the life of truly hilarious comedian! 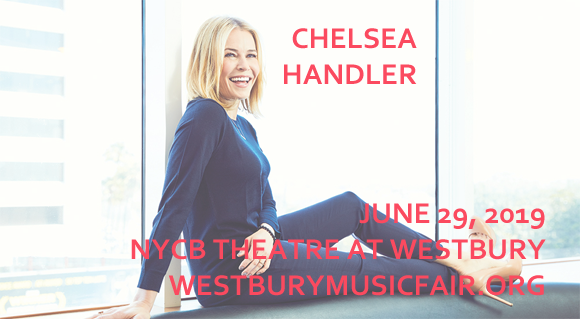 American comedian, actress, writer, television host, producer, and activist Chelsea Handler began her career in stand-up comedy, aged 21. In 2002, she joined the cast of Oxygen's hidden camera reality television series Girls Behaving Badly, which she starred in until the series ended in 2005. Throughout the 2000s, Handler appeared on several comedy shows, including Weekends at the D.L., The Bernie Mac Show, My Wife and Kids, and The Practice. In 2006, she began hosting the late-night talk show Chelsea Lately on the E! Network, which ran until 2014. In 2016, she released a documentary series, Chelsea Does, and hosted the talk show Chelsea, both on Netflix. Handler was named by Time as one of the 100 most influential people in the world on its annual Time 100 list in 2012. She has also written five books that have made the New York Times Best Seller List, four of which have reached number one.