The music man. The troubadour. Yes, he's coming to this side of the Big Apple! Boz Scaggs comes to NYCB Theatre at Westbury on Sunday, 3rd August 2014. Don't miss this amazing musical journey! 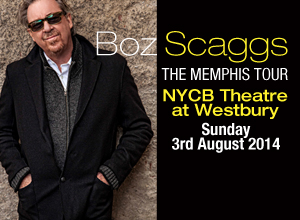 Boz Scaggs is an artist that could make you explore the depths of your emotions. His body of work encompasses a wide spectrum of songs and sounds, ranging from blue-eyed soul, rock, blues rock, soft rock, jazz rock. Boz Scaggs rose up the ladder of fame, starting from the 60s as guitarist and lead singer of the Steve Miller Band. He went solo in the 70s and churned out several Billboard chart-toppers including the critically acclaimed album Silk Degrees, which included "Lowdown" and "Lido Shuffle" peaking at #2 on Billboard 200. Then late 80s, his soulful and heart-rending hits "We're All Alone" and "Heart Of Mine" capture the MOR and Adult Contemporary pop-ballad market, and has earned him spots in the American Top 40, and charted as well in different parts of the world. In the 90s and early 2000s, Boz Scaggs actively toured over the years, yet took a five year hiatus from the recording scene. The release of his 2013 come back album 'Memphis', his first studio album in five years, is now taking him back on the road for an eventful journey with his music from past to present.

For music that's big in soul, rock, and blues, he's the Boz! Go for the big time, don't miss this opportunity and get your tickets now.