One is an American television host, author, syndicated columnist, and political commentator. The other is an American stand-up comedian, talk show host, political commentator, sports commentator, actor, television personality, and radio personality. Expect a wild, heated, unique mix of political commentary, in-your-face opinions, no-holds-barred rants with mega doses of satire and humor. No other speakers could fit the bill than Bill O'Reilly & Dennis Miller. This dynamic duo of public speaking and commentary are taking their 'Don't Be a Pinhead' tour to the NYCB Theatre at Westbury on Saturday 2nd May 2015. Eavesdrop on their tete a tete…get your tickets now! 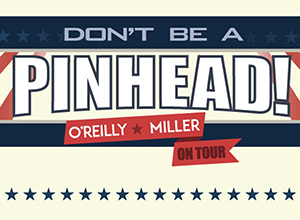 Two heads are better than one… two tongues are sharper than one! Bill O'Reilly & Dennis Miller have joined forces for a no-holds-barred speaking engagement billed as the "Don't Be A Pinhead" tour.

Dennis Miller, ranked 21st on Comedy Central's 100 greatest stand up comedians of all time, has been in the comedy business since 1985 as a cast member of Saturday Night Live. From there he moved on to host a string of his own talk shows on HBO, CNBC and in syndication. He was hailed as the best host of SNL's Weekend Update by Vulture.com. He is known for his laid-back 'rant' style, but is one of America's most celebrated stand-up comedians, talk show host, political commentator, sports commentator, actor, television personality, and radio personality.

Bill O' Reilly characterizes himself as a "traditionalist." Yet he is also considered the godfather of "no spin" and in-your-face television. His TV show hosting credentials include: host of the political commentary program The O'Reilly Factor on the Fox News Channel; newsreporter for CBS News and ABC News; and anchor of the entertainment news program Inside Edition.

Don't miss out on this talk-of-the-town meeting of the minds and exchange of stories, opinions, anecdotes…so put on your thinking caps and lend them your ears. This is going to be an interesting evening!