One of the most recognizable and best-loved voices in bluegrass-country music is Alison Krauss. And that voice is definitely best heard live in a concert hall. With her smash hits like "When You Say Nothing at All" and "Baby, Now That I've Found You", plus fan favorites like "The Lucky One" and "Simple Love", country music fans would definitely find this one hard to resist. Go with the flow as Alison Krauss's angelic voice beckons you to catch her live at the NYCB Theatre at Westbury on Sunday 24th May 2020. Booking tickets is easy. Just click on the 'buy tickets' link on this site. Mark your calendar, save the date and lock-in those tickets now! 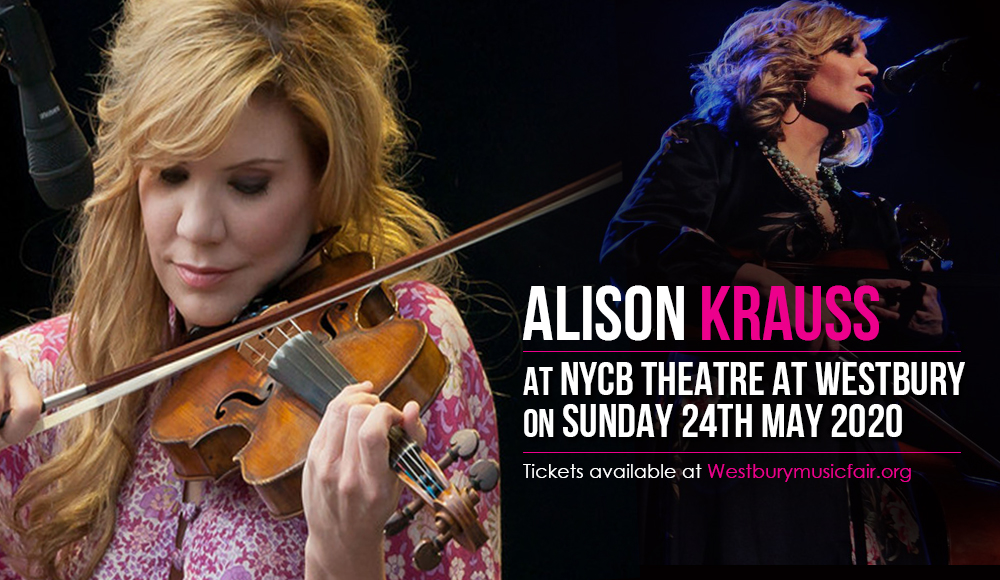 When the heavens opened up and sent its singing angels here on earth, definitely one of them must've been Alison Krauss. Alison Krauss has been described to possess a voice that "flows like honey". She is a child prodigy with a knack at playing the fiddle and was even called a "Virtuoso" by Vanity Fair Magazine. Barely out of her teens, Krauss scored her first hit on the Billboard charts with her first solo album "I've Got That Old Feeling", which also gave her her first Grammy Award. With a slew of hit singles like "When You Say Nothing at All" and "Baby, Now That I've Found You", plus fan favorites like "The Lucky One" and "Simple Love", coming from a string of hit albums, Alison Krauss has won 27 Grammy Awards from 42 nominations, ranking her third behind Quincy Jones and classical conductor Georg Solti for most Grammy Award wins. She leads the pack among female artists as the most awarded singer and the most awarded female artist in Grammy history. Her first – 1991 Grammy win also placed her as second-youngest winner of this prestigious award. Then on the country music turf, Alison Krauss has garnered 14 International Bluegrass Music Association Awards, 9 Country Music Association Awards, 2 Gospel Music Association Awards, 2 CMT Music Awards, 2 Academy of Country Music Awards, and 1 Canadian Country Music Award. And with that, Country Music Television listed Krauss at number 12 on their "40 Greatest Women of Country Music" list in 2002.

An enchanting concert not to be missed! Get your tickets now!